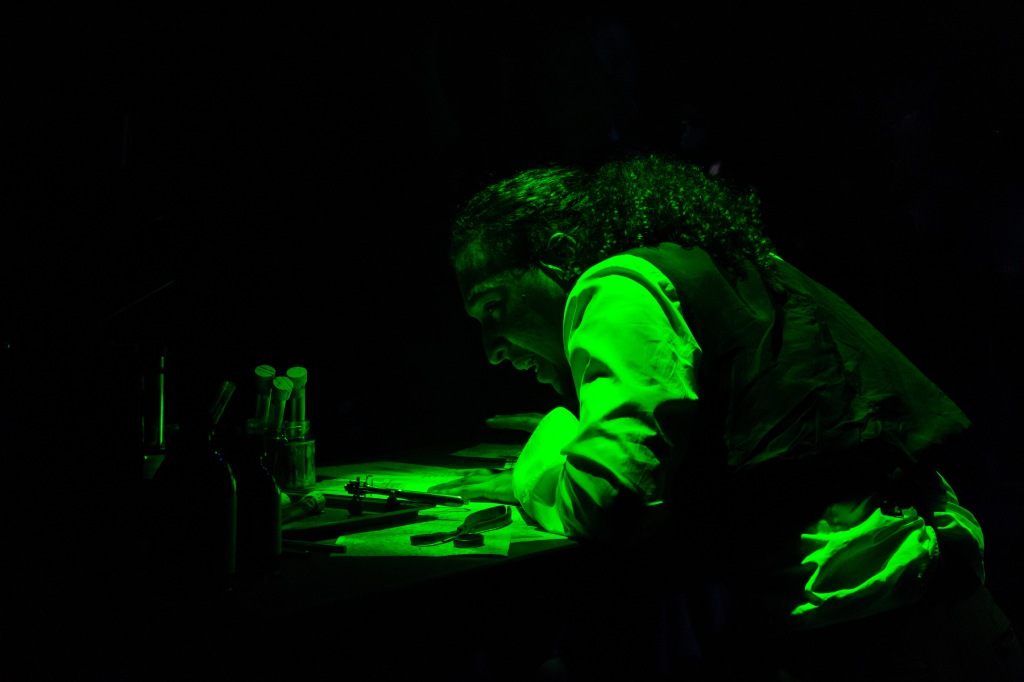 On Thursday 27th of September I got the opportunity to watch Chickenshed’s production of Jekyll and Hyde. If you were an English Literature student like me you’ll know how popular this text is in the academic syllabus. Its aim to represent the juxtaposition between good and evil (this is starting to sounds like an English essay). Before seeing this performance I was interested in how it told the story, originally a novella written by Robert Louis Stevenson, in a way students could relate to. Chickenshed took the route of a musical! It was heavily ensemble led, with episodic scenes titled by chapter titles and lots of movement.

The movement in the show was not the typical jazz-type-musical theatre-dance you get in musicals in London. But their take on it was innovative and fresh, incorporating ballet and hip hop elements. During the first scene with song ‘Poverty’s Child’, sang beautifully, the scene represented a dance between Utterson and young girls trampled by Hyde. The way the performer delicately moved her body, as if she were a rag doll, into ballroom moves was stunning. The contrasting moves of when she was alive and when she was dead were beautiful to watch.

Another scene with great movement was Jekyll’s first transition into Hyde that the audience witness. The ensemble use physical theatre elements to represent this transformation and his internal struggles, whilst Jekyll, played by Nathaniel Leigertwood, used hip hop movements to embody Hyde.

The characterisation of Jekyll and Hyde is amazing. You almost believe they are two completely different people. Just the simple removing of his hairband, Leigertwood is completely transformed. His characterisation was brilliantly executed. The attention to detail, from his hunched back to his crooked fingers, his whole presence embodied Hyde. The choreography again added to this contrast.

Aiding the juxtaposing theme of this musical, was the production. The predominantly dark lighting represented the darkness in Hyde and really helped the audience to gage the story. The production, in Dr Jekyll’s lab was visually amazing and a personal highlight. The smoke machine, green lights reflected onto all his potions in glassware gave off Rocky Horror Picture Show vibes.

With the strengths pouring out of this show it can be said that the singing needed to be a lot stronger. For a show that has zero spoken dialogue, it’s more import for the music and vocals to be the strongest part of the show.  Most of the ensemble sang in high octaves meaning a lack of harmonies and pronunciation, as the songs were very fast. The music and lyrics were great and really informative if you were not familiar with the novella. I agree that singing isn’t paramount to the intention of this production, which was to celebrate inclusivity and to teach young people about Jekyll and Hyde. But I believe if you are going to go down the route of a musical, vocals are a big part of the show.

The penultimate song in the show, although shaky in parts, was brilliant. It was raw and moving. The harmonies were smooth and words emotional. The ensemble coming together to sing ‘Still Human’ represented how we are all human, even if we all struggle with our inner Hyde, which is the exact point of the text.

It was refreshing to see such a varied cast, in ability and diversity, which has such positive impact on the arts. For the audience to look on stage and think ‘they look like me, that could be me.’ It was inspiring. The company worked together so well, all aware of each other on stage and their next movements. Each move rehearsed well, the ensemble not wavering in energy through the whole thing. A musical is hard at the best of times but with the ensemble nearly always being on stage, singing, moving, being responsible for set changes; it has to be applauded. They created a way for young people relate to the text in a fun scenario whilst gaging the themes and issues clearly.

View all posts by aliyaserena